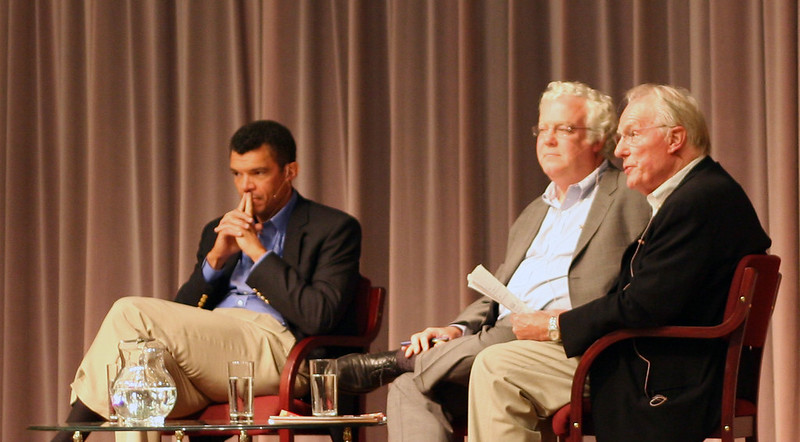 Mark Whitaker, editor of Newsweek, and Jim Kelly, editor of Time Magazine spoke tonight at Stanford about the current state of journalism. Topics included confidential and anonymous sources, the influence of blogging, and the consolidation of news media.

On Mark Cooper and Karl Rove

Time Magazine and reporter Matt Cooper were recently criticized for turning over the names of sources after a grand-jury subpoena. Jim Kelly explained that while reporter’s notes and research are their own property Matt Cooper included the names of his sources in company e-mails that were later demanded by the grand-jury investigating the leak of CIA operative Valerie Plame. Jim Kelly commented “if there was no e-mail with Karl Rove’s name in it there would be nothing of significance to turn over to the general counsel.” Time Magazine and other news organizations are now very careful to not name sources in e-mail and leave a trail for prosecutors. Mark Whitaker commented that people would talk to Bob Woodward and no one else because they knew he was the one who kept Mark Felt’s secret for so many years. Judith Miller may have similar exclusivity in her career when she is released from jail.

Mark Whitaker of Newsweek did not seem to be a big fan of blogging. “I think the idea that blogs are going to replace the mainstream media for the moment is laughable. If the mainstream media disappeared what would bloggers have left to write about?” He also stated that blogs do not have sources that are knowledgeable enough or in a high enough position to demand anonymity.

Jim Kelly appeared to be a fan of blogging. He mentioned the recent bombings in London and the incorporation of pictures and text from individuals on the streets of London into the pages of Time Magazine as an example of timely and very topical reporting. He also believes blogs provide a way for people who are distrusting of big media or who feel under-served in the amount of mainstream reporting of their demographic to find the news they care about.

Large media companies are very aware of the blogosphere and commonly cite Dan Rather and 60 Minutes as an example of what can happen if a mob of bloggers goes after your story. They realize that blogs and online media in general is the best way to reach a younger market but it seems like most companies are not sure how to get started and rely on acquisitions of popular online media brands such as Slate and About.com to provide some experience and experimentation with online media.

The journalism industry is constantly learning and changing its practices with the times. The recent falsified stories of Jayson Blair at The New York Times and the close scrutiny of sources in the cases of Mark Cooper and Judith Miller will hopefully lead to a more thorough review process and the willingness of more sources to be identified or justify their reasons for anonymity. In journalism, as in blogging, reputation belongs to an individual and the reputation of a media organization is only as strong as the reporters earning the Pulitzers or creating sensationalist stories.

News journalism and the world of blogging have a lot to learn from each other. I hope each group identifies their uniqueness and find ways to work together to broaden perspectives and provide thorough in-depth perspectives as well as breaking news.