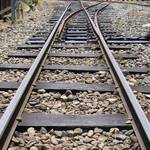 When I think of standards I think of the Stephenson gauge. Two pieces of steel laid at 4′ 8.5″ apart carries rail traffic for 60% of the world’s railroads. The standard has been around for centuries, allowing easy interoperability between rail lines from different companies and countries, creating new and cheaper opportunities for commerce around the world. Railroad companies did not always believe in the power of standards but eventually came together for big contracts and their rewards.

Next Friday I will lead a discussion at Bloggercon IV about the affects of standards on the lives of users. How can cooperation and interoperability lead to happy users, increased profits, and more participation online?

In the world of railroads companies varied the width of their rails to force a transfer of goods from Company A using the trains and workers of Company B. These increased costs meant more direct control over commerce by the companies laying the lines, but ultimately made travel by rail unreliable and costly, forcing customers to utilize other methods of transport such as a river barge. The arrival of cross-country travel and military contracts in the United States eventually forced standardization and better options for users.

In the online world we rely on a few standards to make life easy for users. The W3C activity around HTML provides a common base for implementors and authors. We still have to tweak our pages for optimal use in each browser, but a common baseline reduces some of the work involved in deploying all over the world.

The world of feed aggregators interoperates using the OPML file format for subscription portability. Users can post to their blog and backup their entries using the application of their choice thanks to standards such as the MetaWeblog API and the Atom Publishing Protocol.

Open standards create open competition, eliminating lock-in and allowing users to pick the best services for their wants and needs. The door remains open, but companies focused on their users believe you are happy enough within their walls you’ll never want to head for the doors.

What are your experiences with standards or the lack thereof? What new standards and interoperability would you like to see companies develop to thrill their users? Bloggercon is part of the user-centered summer of love. Let’s chat about the things you love and hate about your experiences online and how collaboration and standards can help.