Kevin Ham built a $300 million web company in Vancouver you’ve probably never heard of. You are likely familiar with his work as you drop vowels from the domain names of your favorite web startups such as Flickr or Tumblr, or try selecting a name for your new company or product. Kevin Ham built a domain name empire named Agoga, cutting exclusive deals with local registrars and national governments, attracting over 30 million unique visitors a month according to an article by Paul Sloan in the June issue Business 2.0 magazine.

Think of a name, any name, and it’s probably already registered as a .com domain. Most sites blocking your path to a memorable and descriptive names are owned by domain squatters, businesses buying domain names in bulk and running targeted advertisements from Google and Yahoo!. Domain names are not only memorable, they influence a site’s ranking in search engines, since a site URL containing the phrase “kittens” has a higher possible correlation to kitten content than a URL without the keyword match. Kevin Ham owns over 300,000 domains, virtual real estate in our online lives. He assembled the portfolio over many years of work, taking advantage of changing technologies, business environments, and legal terms. He is just one example in a global domain industry collecting millions of dollars a year prospecting new names.

Each top-level domain on the Internet owns one or more root nodes defining the availability and location of sites such as MySpace or eBay. Ham wrote automated programs in the late 1990s that could download a listing of all registered domain names, a root zone file, on a daily basis, comparing multiple versions to identify expiring domains of value. In the beginning Ham ran the programs on a few desktop machines in his office, but he quickly stepped up his operations to stay ahead of competitors.

Ham worked out exclusive deals with domain registrars, snapping up expiring domain names on a direct connection from the registrar’s computers into the VeriSign root nodes at the heart of the U.S. Internet. He paid 10-times the typical domain registration fee in exchange for such privileged access to the domain name ecosystem. Ham was able to snap up over 10,000 domains in late 2000, just months after imploding Internet brands vacated their offices and their web brands.

Today registrars directly engage in the game of expiring domains, letting customers set triggers and alerts for a premium price or directing them to a domain resale marketplace. 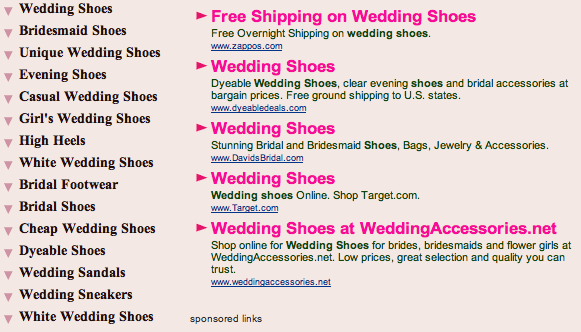 WeddingShoes.com is one of Han’s many sites setup to serve visitors relevant ads from Yahoo. The site offers related keywords, often at higher CPC payouts, for site visitors who would like more advertisements.

A simple site targeting wedding shoes earns Han’s business about $9,100 a year. Not bad for a $8 domain purchase and what he reports and about $7 in maintenance costs per year.

Each top-level domain sets its own terms and conditions for ownership, sometimes requiring a company to operate within the borders of the assigned country, or settling conflict resolution terms. Each top-level domain often has a money back guarantee on purchased domain names varying from 5 to 30 days. Domain name prospectors purchase thousands of domains at a time, run advertisements on each site, and get their money back on the worst performers when their trial period has ended.

Buy out an entire country

I often joke about the top-level domains assigned to small islands in the South Pacific which exist for a few hours each day at low tide. The 12,000 inhabitants of Tuvalu, a member of the British Commonwealth, earn $4.2 million every year by leasing the .tv top-level domain. That’s $348 a year per resident in exchange for helping videobloggers find a more desirable web address. 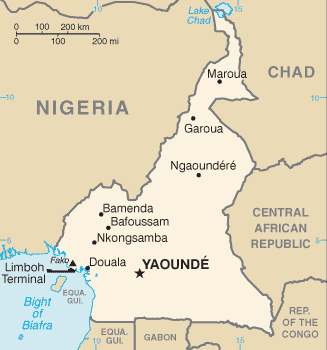 Ham took things one step further, negotiating with the country of Cameroon for rights to the .cm top-level domain. A special deal with the Cameroon government gives gives Agoga control of any wildcard domains, domains requested by a web browser but not yet registered. It’s a gold mine attracting 8 million unique visitors per month to pages full of ads served by Yahoo.

Cameroon currently has about 167,000 online users spread across 39 ISPs according to the CIA World Fact Book. Leasing the unused space for .com typos makes good business sense for the local government.

The Business 2.0 article is full of great stats and stories from the underworld of the domain trade. If someone was buying up property in the physical world and putting up hundreds of thousands of billboards at a time, I’m sure the governments and advertising industry would be forced to respond to the crowded skyline full of more advertisements than buildings. In the virtual world domain names are as plentiful as the numbers and characters that string them together, and on-demand advertising from large companies like Yahoo and Google help line the pockets of these prospectors every month.

The domain portfolios of these domain companies are now big enough they have begun to correlate users across multiple sites, targeting the best possible advertisements based on past visits to any member of its portfolio. The article mentions Ham now plans to build more features into his site, perhaps selling a turnkey wedding shoe selling site along with his domain.

Crazy stuff, but at least I’ll know where to direct my anger the next time every good domain for my next idea is squatted.