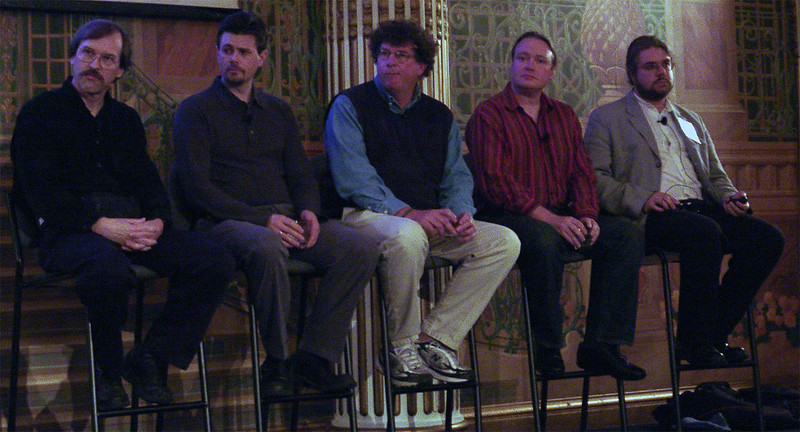 I attended the “Meet the Community” panel at the Open Source Business Conference today in San Francisco. After reading the list of panelists I knew I just had to be there. Pictured above from left to right is Larry Wall of Perl, David Wheeler of Bricolage, Chris Hoffman of Mozilla, Brian Behlendorf of Apache, and Josh Berkus of PostgreSQL.

I was hoping for a session about how thriving communities create good business and for each panelist to share some good tips about maintaining the community. Every member of the panel loved mailing lists and considered mailing lists at the core of their development community.

Brian Behlendorf stated that the first allegiance of an Apache developer is to their identity as an Apache developer. Their employer is a secondary identity most contributors choose not to mention in the Apache community. The committers may leave their current employer yet continue to contribute to the project, often supported in that effort by their new employer. Apache is fortunate enough to have developers earning a professional engineer’s salary to produce software given away for free.

The panel agreed the best way for a company to contribute to an open source project is to hire an engineer and get him or her on the project mailing list and contributing. In some cases a company will approach an open source project with money to spend but no engineers to dedicate to the project in the short-term. Bricolage has had companies sponsor the development of specific features by distributing money to freelance developers all over the world that would love to spend more time coding Bricolage. David is usually able to convince companies this effort makes a lot of sense because the changes will be committed to the core of the project and create a much easier upgrade path for the sponsoring company since they will not have to apply their patches to each new release.

Larry Wall mentioned the debate of whether it is better to have an open source project that is like an encyclopedia, where people can contribute their bits wherever they want or like a poem, where an author maintains a precise order and vision for the entire piece. Larry is a believer in the code is poetry model, especially for coding a language such as Perl.

Legal issues present a significant challenge to open source organizations. Foundations are created so no developer loses their house over a patent dispute. The legal community is now starting to provide legal assistance open source projects through groups like OpenBar and the Software Freedom Law Center. The EFF maintains a cooperating attorneys list to solicit assistance for worthy causes. Lessig asked the open source crowd earlier in the day to calculate the total amount they spend on cable television every year and donate a similar amount to the EFF.

I bumped into Ross Mayfield before attending the event. Ross does an amazing job providing transcripts of the conference sessions he attends and provides a detailed transcript of the panel on his weblog. Ross asked a very good question about how companies evaluate when a project should be open sourced or created and maintained entirely in-house.

Overall a very informative discussion from an all-star panel.