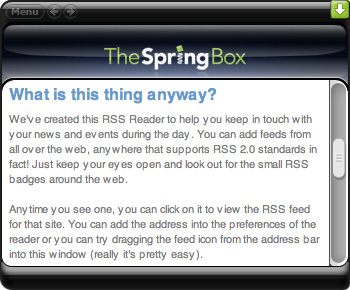 A small group of of Fox Interactive Media employees are working on a new widget platform called TheSpringBox. TheSpringBox allows users to embed Flash widgets in any webpage and download their favorite widgets to the desktop engine for more frequent use. The new widget engine was developed by FIM Labs just outside Atlanta in Marietta, Georgia. (via Mashable) 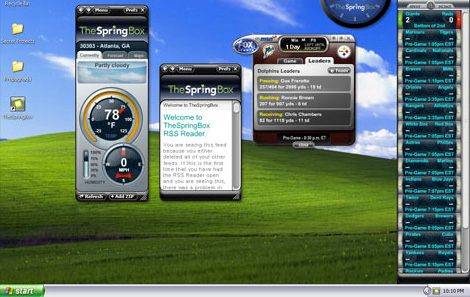 The existence of another desktop and webpage widget engine isn’t too big of a deal, but this is a platform under development from Fox Interactive Media, home of MySpace and a huge widget economy. Peter Chernin, COO of parent company News Corp. News Corporation, recently told investors it’s time to cut out the middleman in MySpace widget services.

If you look at virtually any Web 2.0 application, whether its YouTube, whether it’s Flickr, whether it’s Photobucket or any of the next-generation Web applications, almost all of them are really driven off the back of MySpace.

If we build adequate, if not superior, competitors, I think we ought to be able to match them, if not exceed them.

By providing its own widget platform Fox Interactive Media would be able to whitelist widgets included on the pages and desktops of MySpace users, restricting options and promoting their own services. TheSpringBox could also be a small project explored by a small group of creatives 2000 miles away from FIM headquarters, but based on Peter Chernin’s recent comments I can’t help but think of the protectionist business practices MySpace might introduce.

Microsoft is the only other company to currently bridge the web and full desktop widget space with Microsoft Gadgets on Live.com, Spaces, and the desktop. Google currently powers sidebar widgets on the desktop, Pages, and iGoogle.