Google shocked the online world this weekend with its acquisition of leading video site YouTube for $1.65 billion in Google stock. YouTube will maintain its brand and site, and move into its new San Bruno offices this week as planned. Hitwise estimates YouTube’s market share in September at 46%, an even stronger share in Europe. Google Video had an estimated market share of 11% in the same period.

The $1.65 billion acquisition places YouTube at about the same purchase price adjusted for inflation as eBay’s acquisition of PayPal in 2002 for $1.5 billion. I’m sure the similarities are not lost on the founders and board members formerly of PayPal. I think the acquisition price is absolutely nuts.

While Google Video has been a popular destination for copyrighted videos such as NBA basketball or Nickelodeon cartoons YouTube has become the hub for all things video. Users create videos specifically for videos and its audience and publishers cross-post their work just to tap into the sheer volume of YouTube watchers. The most popular videos from other sites often make their way to YouTube, including copyrighted works such as Daily Show clips or the latest soccer highlights.

YouTube is a mass-market play for Google and differentiated from its paid distribution system highlighted by Google Video. The acquisition delivers millions of pageviews with Google high CPMs delivered through Google’s targeting abilities and video advertising inventory. According to the Wall Street Journal Google’s Eric Schmidt and Advertising title=”Vice President”>VP Tim Armstrong will meet with News Corp. Chairman Rupert Murdoch, President Peter Chernin and Fox Interactive head Ross Levinsohn later this week to discuss Google integration with MySpace and I’m sure YouTube will be a hot topic of discussion.

YouTube launched on December 15, 2005, ten months after the co-founders registered the domain name. Chad Hurley was a former designer at PayPal and Steve Chen was still employed at eBay as a software engineer. The PayPal alumni network served them well, leading to two venture rounds from former PayPal CFO Roelof Botha at Sequoia Capital. Hedge fund Artis Capital Management and Wilson Sonsini Goodrich & Rosati lawyer Stephen Welles also participated in the B round.

I’ve put together an interactive timeline detailing the history of YouTube from the day the first founder quit PayPal until today’s acquisition. Each event is clickable and a few contain links to more information. Enjoy! 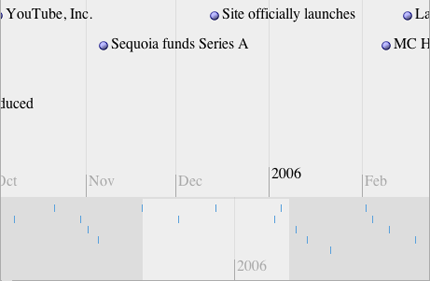