There have been a few accounts on the web about a copyright enforcement action I took yesterday morning. Below are some long details if you are interested in the full details in about 1400 words.

Yesterday morning a Microsoft employee used a photograph of mine in a corporate blog post promoting new features in the Windows Vista operating system and version 7 of the Internet Explorer web browser. The photograph used in the Microsoft blog post pictured Dean Hachamovitch, general manager of the Internet Explorer component of Windows, on stage at the Gnomedex 2005 announcing support for web feed syndication built-in to the next version of his product, bundled with Windows Vista. The image was licensed under Creative Commons 2.0 By-Attribution Non-Commercial and hosted on Flickr, a Yahoo! photo sharing site. 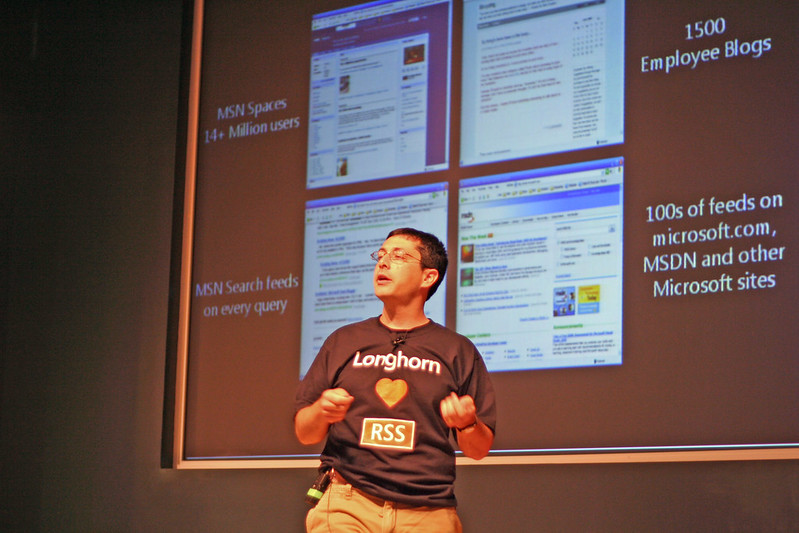 I attended the Gnomedex conference in June 2005 and captured a few photographs from a few rows back as Dean Hachamovitch demonstrated support for web feeds in a Windows Vista build. I posted those pictures to Flickr as quickly as I could, trying to find enough Internet connectivity for what I thought would be the first pictures of the announcement available to bloggers under Creative Commons for use in their posts. I used some of the pictures in-context on my own blog while sharing Microsoft’s announcement with my readers.

Full-resolution pictures of my photo set were lifted off Flickr and posted on just about every Windows news and fan site. A few even offered copies for sale and license for anywhere from $8 for a personal print to a few hundred dollars for the photo‘s reuse. I spent the afternoon and part of my evening sending out Digital Millennium Copyright Act takedown notices to sites in the United States, and contacting individual webmasters of foreign domains (if there was legit contact info available).

The picture of Dean Hachamovitch on stage happened to be the most popular photo of the set, evidenced by the almost 22,000 times the image has been viewed on Flickr, driven largely by blog authors who provided proper attribution.

On Monday morning, December 4, Sean Lyndersay, a senior program manager on the Internet Explorer team, authored a post promoting feed syndication in Windows Vista on the “Microsoft Team RSS Blog” hosted on the Microsoft Developers Network. My photograph was used in this commercial post to promote the availability of the Windows Vista suite of products and the feed syndication platform on Windows Vista available to developers. The depiction of Dean Hachamovitch wearing a t-shirt with a “Longhorn *heart* RSS” marketing message was part of a larger Microsoft marketing campaign at the Gnomedex 2005 conference showing a renewed commitment to an abandoned browser and Microsoft’s willingness to step out and do something totally new and different by not only adding web feed subscriptions as an in-browser option, but exposing that data and handling as an API to any Windows application.

Microsoft used the image I shot of Dean Hachamovitch in June 2005 without attribution and to commercial advantage, in violation of the Creative Commons by-attribution non-commercial license attached to the work. The Microsoft blog post also violated Flickr Terms of Service by not including a link to the original photo hosting page with the use of the hosted image.

I had a few options to prompt Microsoft, or the original author, to either remove the Flickr-hosted photo thumbnail from the post or pay a licensing fee. I could try e-mailing Microsoft, but for some reason Microsoft has been routing e-mails from my domain to the Junk Mail folders of its employees for a while (likely issues with users in the server neighborhood of my web and mail hosting provider, TextDrive, and not a custom mail rule by Microsoft admins). I don’t have the telephone numbers of anyone in the Windows group. What would Microsoft do if someone violated their IP?

A few months ago Flickr co-founder Caterina Fake swapped one of her Flickr photos after improper use on Om Malik’s blog, placing the word “GOATSE” in big letters in place of her picture of an awning of the Brickhouse restaurant in San Francisco. Photo swapping is a definite way to grab the attention of the site misusing your content. The Goatse meme is particularly apt for cases of direct or attempted IP theft.

The Goatse internet shock meme was used on IRC channels as a means of discouraging the distribution and solicitation of copyrighted software. The channel admins set up scripts to return a file named hello.jpg to users and bots attempting to download pirated software, including the then popular Windows 98 and its leaked builds. The meme made its way to the web, with a special gift from Christmas Island (.cx tld). You can read more about Goatse on Wikipedia.

Goatse developed into a piece of Internet culture as its original use to shock copyright offenders expanded. A few companies seeded peer-to-peer file sharing networks with these shock items, introducing a surprise when someone unpacked what they thought was the latest pirated copy of Windows. Microsoft sponsors the activity of the Business Software Alliance and other anti-piracy groups to track down potential and outright violators of their intellectual property rights and send a message through binaries.

I decided to educate Microsoft about the use of images licensed under Creative Commons and hosted by third-party sites by using the same tactics employed in its own fight against piracy, but with a little twist. I edited the Goatse image to remove depictions of anything that might be considered offensive, and placed the Creative Commons circle logo covering up the focus of the image. The modified image was meant to send a message to readers of the Internet Explorer team’s blog that the new picture was out of place, and ensure quick corrective action from Microsoft. I was unsure how many employees in the software division would get the subtle reference to Microsoft’s own anti-piracy efforts.

I sent an e-mail to Sean Lyndersay, author of the Microsoft blog post, shortly after the image swap stating I was the copyright holder and detailing the violation of Creative Commons license and Flickr terms of use. I provided a link to his blog post and advised him to choose a different image. Sean responded with his own interpretation of commercial use, claiming the inclusion of my picture in the post was an appropriate non-commercial use. I sent instant messages to a few Microsoft employees in the Live and Live Platforms divisions to spread some internal awareness and possibly speed up resolution.

As a result of my actions the swapped photo appeared above-the-fold on the Microsoft “Team RSS” blog for a brief period of time late Monday morning. You can take a look at the modified image I used and see a screenshot of the image and its placement on the Microsoft blog if you are interested in further context.

I license my text and image creations under Creative Commons licenses in the hope they will help other people tell a better story or unleash some sort of increased creativity upon the world of content I enjoy every day. When that content is used beyond the terms of my published license I choose to take various forms of action ranging from e-mailing or sending an instant message to the person (if I have it or can query accurate information without much effort) or by issuing legal documents of copyright violations to the offending site or host.

A member of the Microsoft packaged software team lifting one of my images is definitely a case where the infringing party should have known better, as the company routinely takes action to protect its own IP. Will Microsoft will change its IP enforcement policies such as issuing broad cease and desist to members of its community or guilty until proven innocent tactics of Business Software Alliance audits? Doubtful. I likely kicked off a round of IP discussions on Microsoft mailing lists yesterday with a variety of opinions both ways.

There were multiple ways I could have handled the reuse of my content without license, and the Microsoft blog treatment was definitely a unique case for a unique company. Internet Explorer has a bit of a history and happened to take action on the wrong side of copyleft.