Advertisers can create Google Gadget content in any size supported by AdWords images. In the example shown above Intel combined a Flash game with tabs displaying images and text with more information on the Intel Centrino Duo mobile processor. Each gadget interaction is recorded according to a set list of actions such as mouse over, tab views, entering a ZIP code, subscribing to a web feed, or initiating audio or visual playback. External links such as a visit to an external website pass through Google trackers for CPC billing. 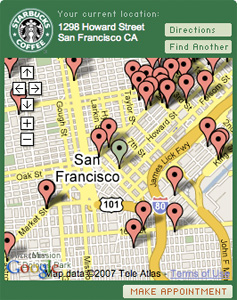 Gadget ads provide new mixed media interactions across Google’s AdSense network. A Starbucks ad unit could display a web feed of the latest 5 tracks playing in its stores, query the local weather and suggest either an iced or hot drink, display local stores on a Google Map, and help you browse seasonal offerings from within a single ad unit. Google serves all of the content via proxy, and the rich media load never touches Starbucks’ servers.

Gadget ads also integrate with DoubleClick’s DART for tracking as part of a larger portfolio. Google is currently limiting the number of publishers with access to widget advertising due to its more technical nature but existing Flash advertisers may already have the option exposed in AdWords.

Google is promoting YouTube as a video hosting and transcoding destination for advertisers. The Google Gadget Ads tutorial page includes detailed instructions for separating hosted Flash video content from an advertiser’s video playback tools. This tutorial is the first time I have seen Google promote the use of YouTube in an without Google branding.

Google will cache almost any content passed to its gadget caching proxy including images, CSS, and JavaScript.

Google delivers any file on your behalf from its thousands of servers distributed around the globe. It’s like your own free CDN for your websites, although primarily designed for gadget content. I can cache my site’s CSS through Google for example.

Online advertising is big business and the primary monetization engine of new web startups. Google’s expansion of its dominant AdWords product into the widget space should extend the demand for quality gadget developers and designers, and bring even more attention to the space. Each advertisement is also listed in the Google Gadgets branded content directory, which may cause some product fans to integrate branded interactions for free on their blogs or personal homepage.

Google is currently promoting gadget developers and companies experienced in Google Gadget development and design. It seems like a really good way to get exposure and potential contracts from big clients such as Honda or Coca-Cola. Designers and widget programmers may want to go get listed and take advantage of some new revenue opportunities.

It’s always exciting to see new advertising options emerge that may have richer interaction experiences and therefore drive a higher CPM. I added AdSense to my blog entry pages a few months ago hoping I might catch a new gadget ad in action — it’s so far not creating much revenue — and I now expect even more regular Google Gadget content matched with my pages.

Widget advertising is one of the emerging widget topics we will cover at this year’s Widget Summit event October 15-16 in San Francisco.