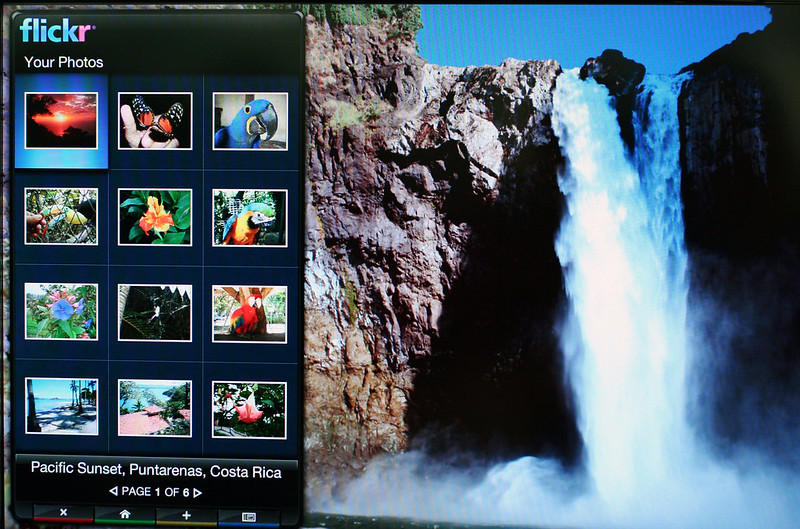 The Internet is coming to your TV, reclaiming your split attention span from the other gadgets around the house. Intel announced its latest effort to power your living room yesterday with new media processors, reference designs, and software stacks that may eventually find their way into the cable boxes, Blu-ray players, and home media centers of 2010. Intel partnered with Yahoo! to deliver Internet-connected widgets, advertising, and content to potential partners with a software stack branded The Widget Channel. Yahoo! spent about two years customizing Yahoo! Widget Engine for high-definition televisions and hardware-accelerated graphics displays. Yahoo! will pitch its widget engine for televisions, display advertising integration, and customizable widget gallery to cable operators, television manufacturers, and other major consumer electronics companies as Yahoo! seeks a prominent role in what it calls the “Cinematic Internet.”

I visited the Intel Developer Forum in San Francisco yesterday for a first-hand look at the new prototype widgets platform. I was lucky enough to bump into Eric Kim, Intel’s SVP and General Manager of the Digital Home group, and recorded a 8-minute overview of Widget Channel. I’ve embedded the walk-through below. High-resolution snapshots of individual Widget Channel widgets are available on my Flickr account.

Widget developers may be already familiar with the Yahoo! Widget Engine, also known as Konfabulator. This desktop engine started out on the Mac, ported to Windows, and now runs inside the Linux-based Intel TV platform. The Widget Engine team is a part of Yahoo!’s Connected Life division which also includes Yahoo! Mobile — powered by Blueprint widgets — and DVR acquisition Meedio. Yahoo! has tied its data APIs to TiVo and Windows Media Center in the past, accessible as a full-screen application after a deep dive through the device’s navigation options. The Widget Channel and its alpha-blended snippet dock complementing the main viewing experience of your TV is a radical departure from past Yahoo! partnerships in the space, an obvious result of designing an experience from the ground-up instead of bolting onto other vendor’s solutions.

Widgets written for the new Yahoo! Widget Engine for TV must conform to four major UI modes: snippet content on the bottom dock, sidebar content, full-screen display, and background processing. Docked snippets are more than just minimized widgets: viewers can cycle through multiple snippets inside a single widget such as weather in various cities or a sports scores. Most sidebar displays mocked-up by Yahoo! used an accordion design pattern to collapse multiple content sections inside a small space. Full-screen experiences match the full-screen designs of the Web. The demo widget for Flickr uses their newly redesigned Flash slideshow display for a familiar look and feel from desktop to living room.

I couldn’t get a solid answer from Intel regarding how tightly Widget Channel was tied to Yahoo!’s Widget Engine. Intel wants to sell its new consumer electronics system-on-a-chip, the media processor CE 3100, far and wide with or without the Yahoo! engine. I expect the underlying platform contains a native widget layer and programming environment with tighter integration but more programming complexity than Yahoo!’s engine in much the same way NVIDIA Preface bolsters its platform offering with a Windows Sideshow gadgets run-time.

From reference design to reality 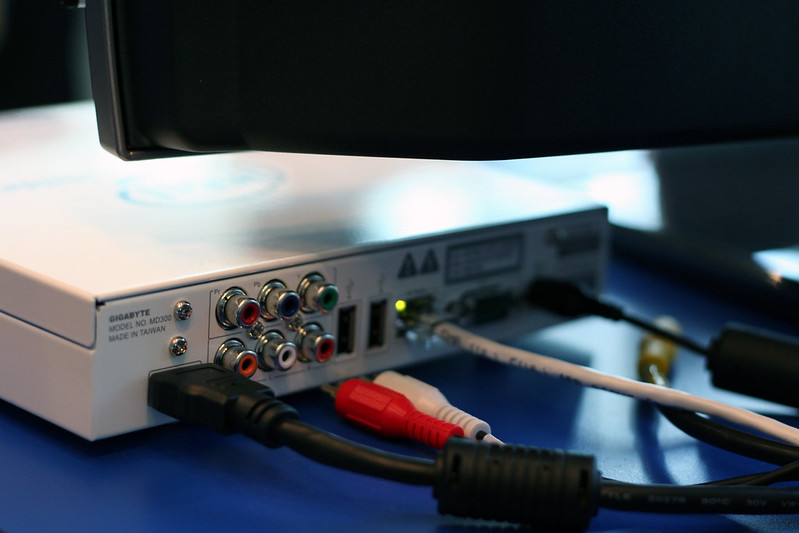 Yesterday’s announcement from Intel and Yahoo! is merely a reference design showing off what both companies hope is the future of Internet-enabled consumer electronics. The Yahoo! Widget Engine for TV still needs a lot of work and there are currently no shipping products implementing the hardware and software stack demonstrated yesterday. Cable companies, television manufacturers, and other consumer electronics companies will evaluate the stack over the next year for possible inclusion in products shipping next decade.

Intel is trying to displace consumer electronics chipsets already in production from IBM and NVIDIA. Sony, Toshiba, and IBM worked together to create the Cell multiprocessor already powering the PlayStation 3 and built-in to the next generation of televisions. NVIDIA chipsets are inside cable boxes from Scientific Atlanta and others. The upcoming Java-based tru2way cable software platform is already under active development by consumer electronics companies and software vendors. Widget Channel could operate as an additional layer on top of tru2way, as mentioned in Comcast’s press release yesterday. The word “Yahoo” does not appear in the Comcast press release and Comcast has only announced their intent to evaluate the new reference design against their own Java-based offerings in 2009.

Widget Channel is a Linux-based operating system with platform software and middleware provided by channel partners. The Widget Engine is one of the available software options on the device. Carrier-specific back-end services including reporting, storage, security, and developer certificate verification reside within the carrier network with possible add-ons such as display advertising powered by Yahoo! or others. Each Widget Channel implementation can choose its own Widget Gallery service and white-listed widgets and possibly receive extra content from a compatible widget gallery offering served by Yahoo!.

Yahoo! has a good opportunity to serve display advertisements, sell premium widget placements and certifications, and promote its own content within each Widget Channel deployment. It may be possible for Yahoo! and Google to program their own compatible widget and advertising layers on top of the base Intel platform to replace or compete with Yahoo!. Major features such as contextual widgets and advertising layers have yet to be developed for the platform, leaving new opportunities for other Internet companies to step in with their own swappable components inside the software stack. 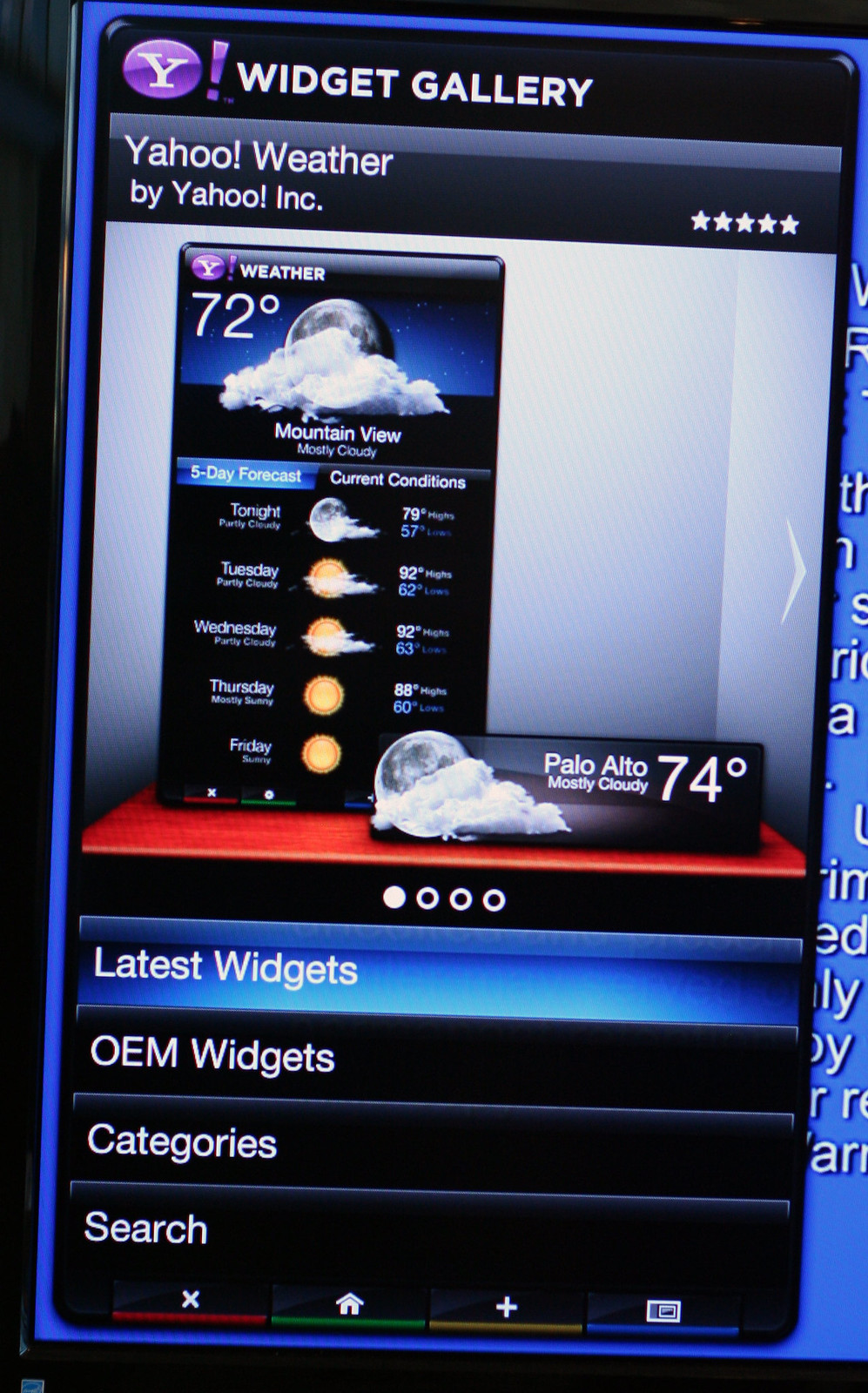 Intel admits interactive services on the television has been a popular goal over the last 10 years but without measured success. [T]he rate of adoption has so far been disappointing, studies show that consumers remain receptive to the concept. New levels of broadband penetration combined with high-definition viewing could change consumer adoption but we are still a few years out from real adoptable implementations. We’ll have to wait and see what hardware and services are announced in 2009 before spending too much development time against a reference design.