Apple’s iPhone OS App Store is a little over two months old and already the focus of both hype and fear among members of the press. KPCB has already invested more than $30 million through its iPhone-specific fund. Established companies are writing iPhone applications for the first time. A few applications have been banned, as expected with most platforms. Apple’s relative secrecy regarding the iPhone platform and distribution policies have caused market uncertainties in need of some further clarity. In this post I will examine the iPhone OS 2.0 platform and the iPhone App Store from the point of view of Apple and other hosted storefront providers.

As I write this post there are over 3400 applications available from the iTunes App Store. 90% of those apps are available for both iPhone and iPod touch. 76% of App Store listings require payment ($1 or more). Developers may distribute an iPhone OS 2.0 application directly to handsets using their own infrastructure or distribute through Apple’s App Store built-in to iTunes and iPhone OS.

Inside the App Store

Carrying third-party content inside your store and on your devices does carry some risk. Developers pay to access the iPhone developer program, sign their applications with unique keys, and assume some of the support burden for their applications. There are a few obvious reasons why a platform such as iPhone might choose not to carry an application in its storefront:

The Podcaster application was initially rejected for redistribution through Apple’s iPhone App. I downloaded a copy of the app, version 1.0.9b, directly from the developer, installed it on my iPhone, and reviewed the app from the point of view of the Apple based on existing publications and guidelines. 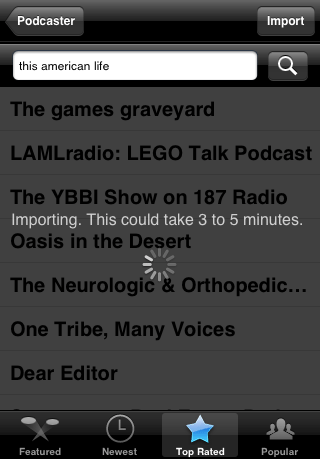 Navigating the tab bar to content sections such as newest podcasts or featured podcasts brings up a splash advising 3-5 minute wait times before content is returned. Red flag. My previous search input does not disappear when I change navigation modes. 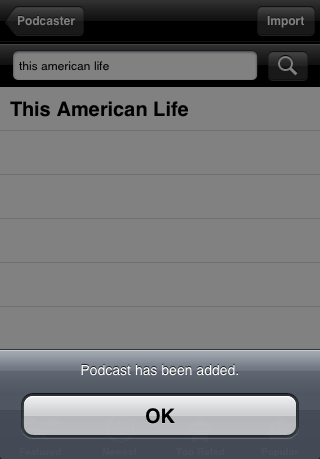 The developer used a single button action sheet with a vibration action to confirm each new podcast download. Apple adds a badge to the Downloads tab for a similar action in iTunes. The user has to dismiss a confirmation sheet for every new addition. 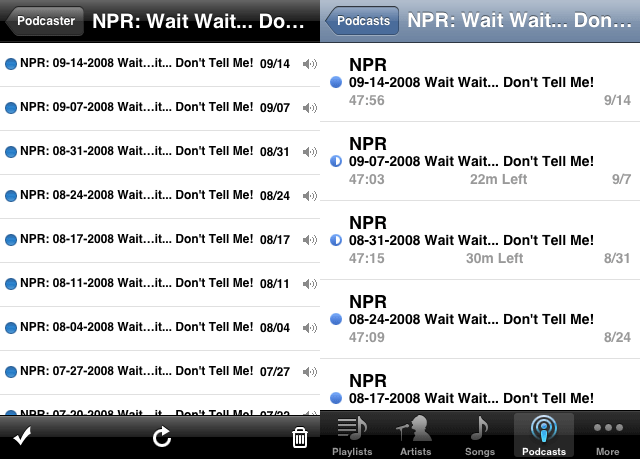 Pictured above is a view of the same podcast in Podcaster and iPod. Duplicate functionality when tethered but Podcaster does provide over-the-air updates direct from the handset. Podcaster has some obvious errors with text display in the regular table view but the display does work. Displaying the sound disclosure indicator on every row is a bit overkill: Apple only includes this disclosure indicator when the audio file is currently playing. Small fit and polish issue.

Podcaster submitted the first release candidate of their iPhone application to iTunes Connect, App Store’s web-based management tool, on August 14. Application release notes are available through the developer’s Twitter feed. The version submitted to Apple in mid-August had problems downloading and playing many podcasts including FeedBurner’s redirect URLs or large downloads (likely a Range issue). On September 12 Podcaster heard back from Apple regarding their App Store submission. The $4.95 application was not accepted for distribution through App because it it duplicates the functionality of the Podcast section of iTunes.

The developers resubmitted Podcaster to iTunes Connect on September 13 with a new description before launching a media campaign and ad-hoc distribution. 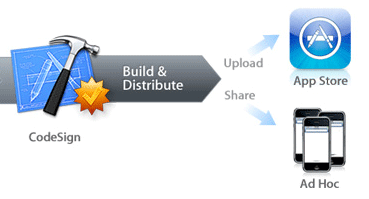 As of yesterday afternoon Podcaster had provisioned 1130 devices for distribution across 12 different copies of the application hosted on Google Code. Each new uploaded build included up to new 100 authorized devices after the publisher received payment via PayPal. It’s stretching the Ad-Hoc distribution model a bit but the application may have collected approximately $11,000 over the weekend through suggested donations of $10 per handset. At the time of writing Apple has not pulled the application or developer certificates from their central certificate authority.

It’s not always clear what Apple is up to but there are legitimate reasons to not carry an item for sale in your store. iPhone OS will continue to be a popular development platform even if Apple is overwhelmed with interest and developer support. The best developer information comes from within the confines of ADC, WWDC, and iPhone developer programs, and other privileged access forums restricted by Apple and its partners.