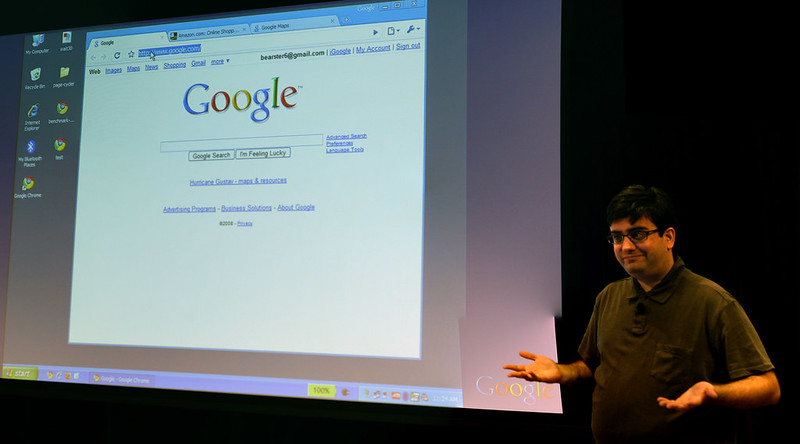 Google released its second web browser yesterday afternoon, adding additional headroom for web applications stretching the limits of what it’s possible to accomplish within a web browser. The Google Chrome team assembled domain experts in various fields over the past six years, both through direct hires and acquisitions, to create a new browser and its critical components from scratch. GMail and Google Maps pushed the Web to its limits, taking advantage of browser technologies invented in Redmond but left dormant for far too long. Contributing to Firefox’s core, writing browser extensions, and championing HTML could only take the $150 billion company so far: they needed to own the full browser to push their Web efforts forward at full speed.

Brian Rakowski joined Google in July 2002 as the company’s first associate product manager. His first assignment? Launch GMail with features and responsiveness to rival desktop mail clients. Gmail tapped into relatively dormant browser features such as XMLHttpRequest, sockets, prefetch, and more to create a web applications stretching the limits of what was possible inside web browsers of 2004. Today’s Gmail continues to run into a browser’s limits, setting minimum requirements of Internet Explorer 7+ and Firefox 2+. Google web apps teams such as Maps and Mail continually bump their heads against the latest capabilities of web browsers and in some cases invent their own runtimes.

Ian Hickson first learned the inner workings of web browsers while an intern at Netscape. After working on Opera for a few years and creating tests for Firefox Ian joined Google to continue his work on new browser features. HTML5 and browser compliance “acid” tests are significant attempts by Ian and others to redefine Web browsers through specs, test, and implementations but until now Google could only offer development help and browser extensions such as Gears to accelerate browser capabilities.

Google extended what it could not immediately add to the browser core. Gears for new application functionality on multiple browsers. Browser Sync to synchronize browser settings and data across multiple computers. Safe Browsing to create more web trust. Teams from each of these extensions are now working on Google Chrome.

Google released its first official Web browser on August 18, 2008 with the beta release of the Android mobile operating system. Google acquired Android in August 2005 to establish a foot-hold on the fastest growing computer (and Web) market: mobile handsets. Android highlights Google’s web properties through its WebKit-based browser and dependent applications. Google acquired Ottawa-based Reqwireless and its mobile web browser in the summer of 2005 to team up with the Android team on its web interface. Web views are an integral part of Android and Google Chrome shares much of Android’s code, including its graphics engine.

Google acquired application security company GreenBorder in May 2007. GreenBorder technology automatically sandboxes web code and network traffic by creating a bridge between applications. The GreenBorder technology isolated Internet Explorer or Firefox instances into a “sandbox” inside virtual machine instances. These sandboxes form the code isolation layers of Google Chrome, protecting other tabs and the parent operating system from the code executing on each web page.

A New Browser from Scratch

Ben Goodger, Google Chrome’s tech lead, is best known for assembling the Firefox web browser out of Mozilla’s SeaMonkey application suite. Manticore, Camino, and later Firefox were all attempts in 2001 to rethink the Web browser for the modern age. Browsing took center stage away from a communications suite, user interfaces reimagined for Web efficiency, and (some) legacy cruft tossed to the side. Google hired Ben in 2005 to strengthen its own browser contributions and eventually fully rearchitect a web browser for the modern Web.

Google hired top Firefox developers in 2005 and 2006 such as Darin Fisher, Pam Greene, and Brian Ryner. In Spring 2006 the team began work on a new browser prototype built on top of WebKit designed for broadband-connected, always-on, web applications such as Gmail or Google Maps. Could the browser experts give web apps some breathing room?

Modern computers feature multi-core multi-gigahertz CPUs, gigabytes of memory, megabits of bandwidth, and bulky hard drives. Our web browsers should separate browser tabs into their own processes, multi-thread all communications with the operating system, boost cache sizes, and not be afraid to command more bandwidth when available. Internet Explorer 8, Firefox 3.1, and Apple Safari are taking fresh approaches to web browsers for modern machines but Google Chrome has the advantage of a fresh start to achieve some features not currently possible in other browser architectures.

Features such as tab-isolation and task monitoring are difficult tasks to add inside an existing browser architecture of shared run-times and window models (as John Resig mentioned). Internet Explorer 8’s Loosely Coupled IE partially abstracts browser tab instances and the industry is generally headed in this direction.

Lars Bak and his team in Århus, Denmark have spent many years writing virtual machines: the run-times that translate programming code into machine code. Lars wrote Sun’s Java VM, HotSpot, and later slimmed down the VM for J2ME (CLDC HI project Monty). A few years ago Lars and his team in Denmark began work on a new interpreted JavaScript engine optimized for x86 and ARM architectures.

The V8 engine is specifically tuned for recursive JavaScript tasks, optimizing commonly used components of your application. V8 is multi-threaded, opening up new parallel processing on multiple computing cores. V8 guesses how you might use your JavaScript code, and backtracks over any faulty assumptions. It’s just one of the new engines we’ll see inside our web browsers by the end of 2008.

Google Chrome could have used the same JavaScript interpreter as its WebKit rendering engine (JavaScriptCore, SquirrelFish) but the team had an opportunity, and the funding, to rewrite an interpreter from scratch for desktop and mobile runtimes.

The V8 engine enables new feature sets for Google’s web applications such as Gmail and Google Maps. Web application developers avoid adding features that visibly slow down browsers or cause processing pauses in your application experience. New speed in new areas adds functionality to existing apps. Google programmers should create more efficient code, tested against multiple interpreters, and optimized for modern computers as a result of V8. Even if Google Chrome gains no significant browser market share I still expect it will be the best single-site browser for Google web applications.

Google Chrome adds additional JavaScript functionality through Gears. Gears is bundled with every Chrome install, adding new features to the web browser faster than previous plugins. The Gears libraries include support for new local cache structures, local databases, location data, background tasks, and file handling. Chrome boosts the available Gears footprint for web developers, including Google’s own apps such as Google Reader and Google Docs (and my blog). The current Gears code included in Chrome replicates V8 and sqlite code already present in the browser, a bolt-on that will hopefully be integrated in the near future.

Chrome, V8, and Gears will be a new testing ground for Google’s HTML5 efforts, winning a new seat at the table as an implementor with upstream standards groups such as W3C.

I am tracking at least 20 people involved in the Google Chrome project across Google. I’m sure Chromium commit logs will reveal even more (update: more complete list here), but below is a quick summary of Chrome staff.

Google’s business depends on the speed and availability of Web access to search, advertising, and applications. Chrome is Google’s second attempt to better control the front-door to its content with full applications optimized for its heavy apps. Google Chrome builds on top of the work of Android by adding individual applications to already popular operating systems. Google has flirted with the idea of its own web browser for many years but has only recently released working implementations of its own full browser applications.

Android, Chrome, and Gears will continue to grow in unison and extend individual pieces into established operating systems. Google is building a new suite of application extraction layers that should have strong leverage across Windows, Mac, and Linux to directly control the company’s destiny on these platforms.