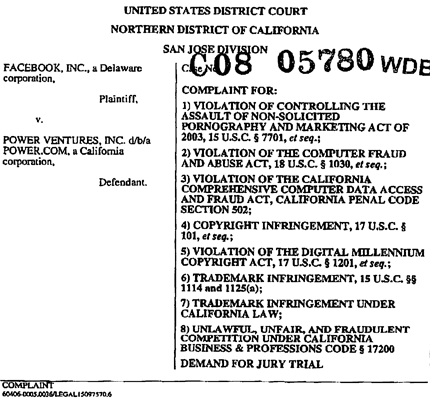 Power.com is headquartered in Rio de Janeiro, Brazil with additional offices in San Francisco and Hyderabad, India. Power raised $8 million from Draper Fisher Jurvetson, DFJ affiliate FIR Capital, Esther Dyson, and other investors. Facebook is seeking triple damages for willful violation including all revenue generated by Power.com in the month of December. Facebook may be able to claim $10,000 for each Facebook account accessed by Power under California Penal Code section 502 due to repeat violations.

Collecting Facebook usernames and passwords is at the heart of the dispute. Power.com impersonates a Facebook user after collecting their username and password. The site imports friends lists from Facebook and other social providers to create a meta profile for its over-networked members trying to keep their many personas in sync. Facebook Connect, announced in May and available for beta testing shortly after, provides account linking between Facebook and other sites, SSL transport, and friend imports. Facebook Connect limits the data flow of Facebook user data in ways a direct login would not. Power.com assumed full user powers as a remote agent of a Facebook user instead of an authorized proxy to accomplish its own goals and violated Facebook terms of service in the process.

I covered some of these data portability issues and best practices in my Data Portability, Authentication, and Authorization post last year.

[T]he sole end for which mankind are warranted, individually or collectively, in interfering with the liberty of action of any of their number, is self-protection. That the only purpose for which power can be rightfully exercised over any member of a civilized community, against his will, is to prevent harm to others. His own good, either physical or moral, is not a sufficient warrant…In the part which merely concerns himself, his independence is, of right, absolute. Over himself, over his own body and mind, the individual is sovereign.

Modern society mostly allows people to commit self-harm as long as that action is not also harming others. Facebook restricts access to another person’s member data beyond the original intent that person’s sharing. New data use must explicitly receive permission to participate in shared data beyond the walls of Facebook.com (you may invite me into this new context but I am not automatically imported). Data is shared within a friend context on Facebook with the understanding such information is protected and may be limited to only a group of approved friends. Once that friend data starts propagating outside its initial use (by a Facebook member or Facebook itself) the trust associated with sharing data is violated. If you have ever thought twice about posting an e-mail address on a web page out of fear of automated data harvesters you have experienced communicating with a known community of site visitors versus other uses. Facebook wants to be an identity hub of real data about real people and takes certain steps to protect that data exchange.

Power.com launched to a United States audience on December 1, 2008. The site previously focused on the Brazilian market with support for Flogão and Google-owned Orkut since launching in August. Facebook contacted Power.com on December 1, according to the lawsuit, notifying the team of their terms of service violation.

Power Ventures CEO Steven Vachani responded to the Facebook inquiry on December 12 (11 days later) promising to delete all existing Facebook data stored on Power.com servers and implement Facebook Connect as a replacement by December 26. The next business day Facebook acknowledged the e-mail and waited for confirmation of data deletion and Connect switch-over. Vachani confirmed the transition progress on December 22 (4 days before the supposed switch).

Vachani e-mailed Facebook legal council after the close of business on December 26 and communicates a “business decision” not to comply with Facebook’s request to stop collecting and storing Facebook logins on Power.com. Vachani claimed the site would implement Facebook Connect but such integration would take over 5 weeks to complete. Power.com kicks off a “launch promotion” that same day with a $100 reward for the Facebook user who invites the most friends to join Power using their Facebook credentials. Facebook implements an IP-address block against Power.com servers on the evening of December 26 to prevent further abuse.

Power.com circumvents the IP-block by Facebook and continues its marketing campaigns. Power sets up a Facebook event page to promote its $100 signup give-away and uses the existing Facebook accounts in its system to send event invites to friends lists.

Facebook took legal action against Power Ventures on December 30, one business day after the Christmas holiday weekend, to prevent further abuse after civil discussions obviously broke down. Facebook accused Power of trespassing on Facebook servers in San Jose (a modern form of ToS violation), spamming Facebook members (violation of CAN-SPAM), and knowingly circumventing data protections (DMCA), and unlicensed use of the Facebook trademark.

Power Ventures could take proactive steps to look like a legitimate, responsible business in the eyes of potential business partners such as Facebook.

Power.com domain data currently lists “DiscountDomainRegistry” as a technical contact. “Power Assist Inc” is listed as a registrant and “Leigh Power” is listed as an administrative contact. Not good identity management.

If you are going to collect member login credentials from other sites you should at least use a SSL certificate for more secure data transfer. Self-sign if you must, but $30 will buy you a certificate recognized by major browsers. If you can afford extended validation certificates and the verification process that entails, even better.

Facebook allows its members to join one or more corporate networks. Register your company on Facebook and at least associate executive and developer accounts. This additional verification step helps Facebook identify your employees. Other social networks have similar verification and associations.

Power Ventures is not listed in the Facebook corporate network directory.

Power.com violated Facebook terms of service by accessing and storing Facebook member data on its servers. Facebook immediately contacted Power regarding this violation and attempted to work with the site as they transitioned to the official data API, Facebook Connect. Power reneged on their agreement hours before promised delivery and immediately launched a marketing campaign to financially reward further violations. Facebook decided enough is enough and blocked Power through technical measures followed by legal measures when the site did not comply.

I have little sympathy for Power and its actions. I hope other sites violated by Power.com such as Google, Microsoft, MySpace, and Hi5 put a stop to websites like Power harvesting user data instead of using permitted access methods such as OAuth. Locating your business in Brazil with servers in Canada and development in India does not shield companies from the consequences of abusive practices.