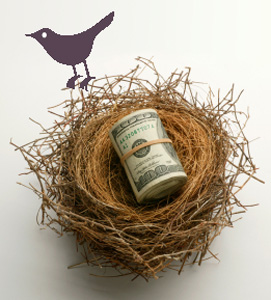 Micro-blogging service Twitter will celebrate its third birthday in March and may have a revenue model to support the company over the long-term. Last month Twitter CEO Evan Williams told Kevin Maney of Porfolio.com the company will kick off new revenue streams by March 2009 to avoid raising another round of venture capital funding. Twitter’s deeply engaged community would love to see a sustainable business develop around the site, its services, and the community. In this post I will take a deeper look at Twitter and its revenue potential as publicly hinted by its founders.

Twitter is a hosted blogging platform that limits blog posts to 140 characters or less. Short Twitter messages were designed as an archived status message communicated to friends via instant message, text message, or even radio bursts. Twitter’s 140-character message fits within a SMS message’s 140 octets for UTF-8, a design contraint that has spurred new content creation with little effort.

Twitter also operates a near real-time search engine against its public content. The search engine receives direct updates from the Twitter blogging service over a streaming API interface nicknamed “the firehose.” Twitter currently allows trusted external partners to consume this full streaming update of its data. Other consuming clients are limited to a public timeline snapshot of 20 Twitter updates every 60 seconds.

Technically there are two Twitters on record with the state of California: Twitter Inc. and Twitter Services Inc. The difference may be a remnant from Twitter’s beginning in incubator Obvious Corp. or it could be a sign of the company’s plans to operate its services business separate from the blogging platform.

Twitter currently pays vanity short code fees and SMS fees for mobile-terminated and mobile-originated messages in the United States and Canada. Twitter accepts mobile-originated messages to a long number in England. An intermediary such as Sybase 365 sits in between Twitter servers and the cellular networks of AT&T, T-Mobile, Sprint, Verizon, Bell Canada, Rogers, and more. A subset of Twitter users take advantage of SMS update notifications but this feature is currently a drain on Twitter cash reserves.

SMS fees typically reverse at volume, with carriers paying application providers for SMS revenue generation. A carrier such as AT&T might charge 5 cents per SMS and pass a fraction of a cent per message to large applications such as Yahoo! or Google. Twitter could be approaching a SMS volume that provides bargaining power with carriers for mobile-terminated and mobile-originated message revenue domestically and mobile-originated message revenue internationally. New hire Kevin Thau, Twitter‘s Director of Mobile Business, will likely be creating closer partnerships with mobile carriers to lower Twitter’s SMS spend and possibly extract revenue from this feature.

Twitter has publicly mentioned future revenue extraction opportunities from businesses on Twitter. Dell directly measures revenue generated by its multiple Twitter channels. Comcast offers “digital care” for its customers through a special Twitter account. Whole Foods discusses groceries with over 22,000 subscribers. Twitter has yet to extract value from the thousands of brand connections it currently enables. Brand monitoring will likely be the first corporate product from Twitter. 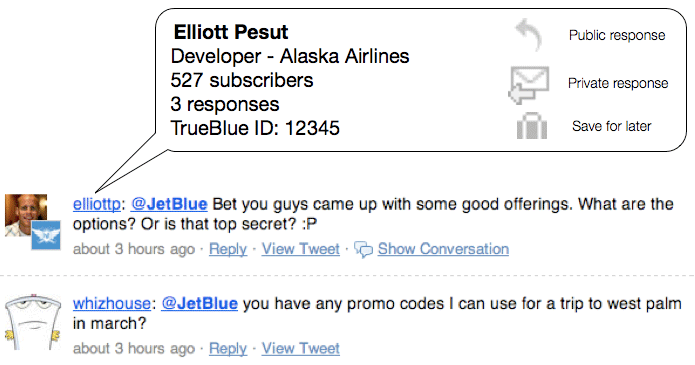 Brands monitor conversations on Twitter through specially-crafted search queries. Jet Blue might track all conversations around its brand, for example, likely leading to customers or potential customers experiencing issues in need of real-time solutions or clarity. Twitter does not currently provide much information about the people behind such brand mentions directly in search results, leading to a extra required steps for brand managers. What might brands want in real-time brand management dashboard for Twitter?

The limited data sharing of full Twitter updates limits the open competition to data services developed by Twitter in-house. Nielsen BuzzMetrics, Biz360, TNS Cymfony, and many others currently tap into broad social media streams for brand insights. Twitter could compete with these dashboards in a more real-time environment, resell their solution to larger monitoring firms, or both.

Twitter plans to roll out revenue-generating services to serve corporate customers within the next two months. The company is also rumored to be raising additional capital that could extend its runway before Twitter needs real revenue under its wings. I believe SMS revenue-sharing and brand monitoring will provide Twitter revenue in 2009 with additional paid features made available to enthusiast users later this year. Twitter’s best path to realized revenue may be an acquisition but large companies always like a bird with wings.