The consumer version of Microsoft’s Windows Vista operating system is only a month away and bloggers are already receiving their first review units. So far the review units sound pretty boring compared to the Windows Vista capable hardware available throughout the world. I put together my own list of five grope-worthy notebook computers ready to test Vista on multiple fronts.

You might prefer a silent ultra-portable or a power-hungry luggable. You can search for WiFi without ever opening your computer or get online anywhere with cellular broadband. The latest Apple hardware runs Vista without a problem too.

I expect this entire list will be out of date in two weeks as companies announce their latest products at CES but it’s a fun snapshot across a variety of portable hardware. 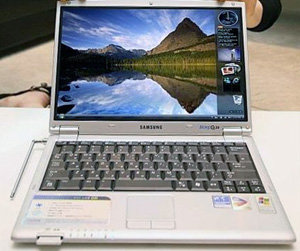 The Samsung Q30-SSD ditches the hard drive, storing all your data on 32 GB of flash memory. Flash memory is 30 grams lighter, twice as shock-resistant, and about 3 times faster than a laptop hard drive. The 12″ laptop is completely silent and weighs 2.5 pounds.

The Samsung Q30-SSD also has a built-in TV tuner if you live in a region with DMB. 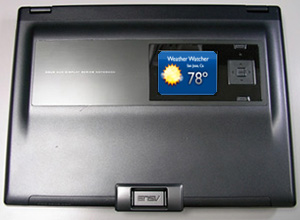 The Asus W5Fe is one of the first laptops with an external display, displaying widgets on your computer’s outer casing. It’s part of the Intel Newport series of laptops and powered by the PortalPlayer Preface platform. You can check for WiFi hotspots within range, get a quick glance of your e-mail, or check out any Microsoft gadget through Windows Vista SideShow. 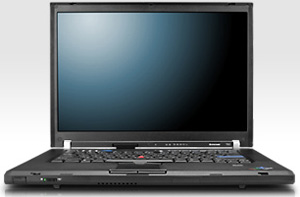 The Lenovo T60 features Cingular HSDPA as a built-in option, hooking you up with an encrypted 700 kpbs connection at low latency throughout major U.S. cities. Wireless data access definitely changes how you use your laptop on the go, providing access to e-mail and other timely data most anywhere.

If Windows Vista fails to impress you can install Ubuntu Edgy Eft on the Lenovo T60 in no time. 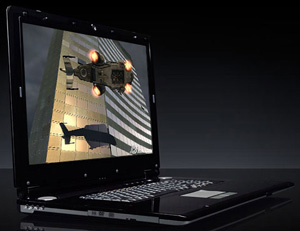 The Alienware Aurora mALX will render the fancy graphics features of Vista effortlessly, powered by two parallel-proceessing Nvidia graphics cards and 64-bit AMD Turion CPUs. The 19″ notebook computer has 4 speaker surround sound and even has its own subwoofer.

The Alienware mALX weighs over 15 pounds; that’s about three MacBooks. It’s a bit excessive for most people but should yield a Windows System Performance Rating above a 3. 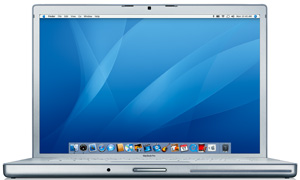 The Apple MacBook Pro lifts heavy loads thanks to a 64-bit Intel Core 2 Duo processor and 3 GB of RAM. The 15.4″ laptop is light for its size, weighing about 5.6 pounds, and can run a variety of operating systems beyond Mac OS X.

Fire up Boot Camp and you have a Windows Vista PC ready to go with access to full system resources inside of a stand-alone boot sequence. It’s possible to virtualize the operating system, but you will risk taking away some much-needed resources from demanding Windows Vista software.