Gadget platforms have many levels of integration and customization beyond a metadata wrapper and some markup. Beginners and tinkerers might stick to the basics, but some gadget authors go beyond the plain essentials and add support for multiple languages, tabbed views, and specify any requirements a gadget may expect. In yesterday’s post I provided an overview of the Google Gadgets ecosystem, detailing the types of content and authors producing Google universal gadgets. Today I’ll dive into developer features and observed implementations. 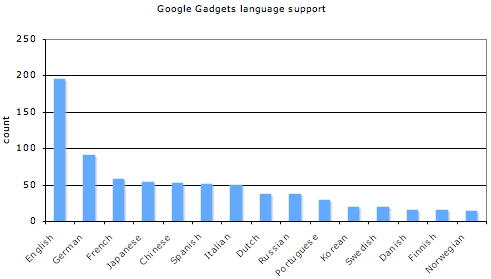 328 Google gadgets (8%) specify one or more message bundles targeting a specific language. Although Google only officially supports 15 languages I observed 36 total languages throughout its ecosystem including Serbian, Kannada, and Catalan. I was surprised to find Asian languages in the top 5, as translation services are not as widely available to the gadget authoring masses of North America and Europe and encoding can be tricky. 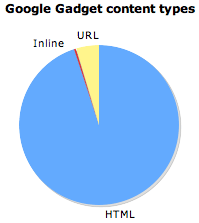 A large majority of gadgets (71%) do not declare their Content type and therefore default to html. 5% of all observed Google gadgets have no content markup and instead reference an external URL (an easy way to bootstrap a gadget with pre-existing dynamic content). Only 0.26% of all Google gadgets request inline access. 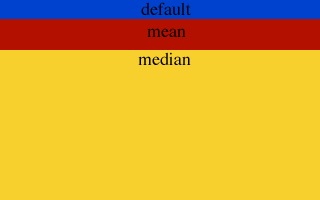 Google Gadgets may specify a natural gadget height, shrinking or expanding the rendered gadget window beyond the default height of 200. Twenty-one percent of all gadgets specified a custom height, with a mean height of 181 and a median height 150. It looks like 200 is a pretty good default value for widgets, since gadget authors don’t seem to vary too far from the default.

Google Gadget developers can use extra features and Google UI tie-ins through feature-specific JavaScript libraries. 847 gadgets (20%) request one or more of these additional six libraries.

Dynamically adjusting a gadget’s height is the most popular extra feature of Google gadget platform. Tracking a gadget’s stats through Google Analytics is the second most popular library, followed by programmatic access of up to 2 KB of user preference storage. MiniMessage is the newest library of the group, showing a temporary message (or advertisement) inside a gadget and I was surprised to see it already used almost as much as tabs.

Google Gadget authors can specify one or more operating systems, web browsers, or browser plugins that may be required to render their gadget.

Flash is explicitly defined as a plugin requirement in 46 gadgets (1%), but only 16 of those gadgets (35%) specify a minimum required version of the Flash Player. Flash usage within Google Gadgets content is likely much higher, just not explicitly defined inside the module preferences.

Google Gadgets content is produced for a global audience including a few relatively small language bases and countries. Most gadget authors create new content instead of simply directly referencing a remote page, and only a small percentage of gadgets require inline access its additional security access. Gadget authors are taking advantage of Google’s built-in JavaScript feature libraries to display and track dynamic content, including Google’s support for advertising and promotional messaging in small, dismissible boxes.

Google-produced gadgets are the most popular, but 66% of total gadget views, over 400 million per week, are due to the work of third party developers and fans of site content.

I predict a big increase in Google Analytics integration with new and existing gadgets in the next few months as authors track details of their gadget success on the increasing amount of gadget endpoints. I think Flash usage is higher than explicitly specified as Flash 9 content produced for MySpace becomes the lowest common denominator for companies just getting started in the space or who just prefer to stick to their Flash/Flex tools.

I’ll continue to monitor the Google Gadget ecosystem over time and post some periodic updates as my crawlers discover new things.