Last week the Google Gadgets team released page view numbers for gadgets in its directory, giving outsiders their glimpse of gadget activity across Google Personalized Homepage, Google Desktop, and syndicated throughout the web through Google Gadgets For Your Page. Over the weekend I crawled the entire Google Gadget directory, collecting information about every listed gadget to create a better and more complete understanding of a widget/gadget ecosystem including its level of health, geographic diversity of authors and supported users, popular categories, and some of the most popular gadget programming methods (just to name a few). In this post I’ll share some statistics on the Google Gadgets ecosystem from a business point of view. Tomorrow I will post details and statistics about ways Google Gadget developers are going beyond the basics with features designed to reach a worldwide audience and deliver a smaller footprint inside these rich Internet applications.

Note: This analysis is based on all gadgets listed in the Google Gadgets directory on Saturday, March 3, 2007. I am capturing ongoing values and may do more with this data over time. Directory listings were received directly from the public directory after receiving permission from Google. Gadget source code was pulled from individual publishers.

Authors can submit their completed gadget to Google for inclusion in the directory, placing their content as close as a link away from the Google Personalized Homepage and Google Desktop. Google stores a local copy of each gadget for dependency and to reduce external loads, which keeps some of the 8% of observed failures humming along just fine. 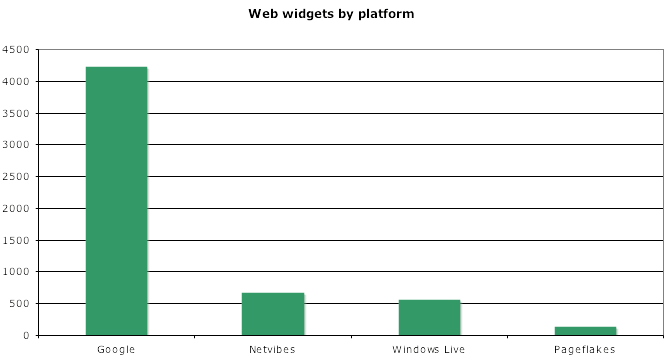 Google currently has three-times the number of web widgets available in its directory than Netvibes, Windows Live, and Pageflakes combined. 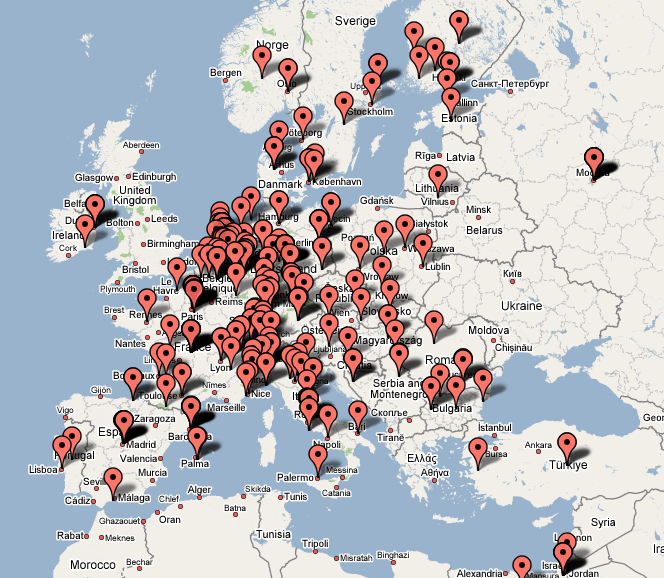 There are 2,009 authors producing Google’s 4,226 gadgets. Gadget authors are distributed around the globe, including Columbia, Iran, and Nigeria. Most gadgets are created in the United States and Europe, Google’s two strongest markets.

Authors receive a link and a listing on Google.com and Google domains throughout the world. A weighted link from Google domains is a prize itself, but surprisingly only 100 gadget authors (5%) have taken advantage of this promotional opportunity.

Google produces seven of the top ten gadgets in its ecosystem. Two of the top gadgets are produced by fans of an information service, Wikipedia and Word of the Day. Gadget promotion by Google and third-parties can heavily influence a gadget’s popularity and each dictionary site likely receives a large number of referrals from its 13 million weekly gadget views.

The median Google gadget received about 6,000 gadget views last week, far from the average of 300,000. 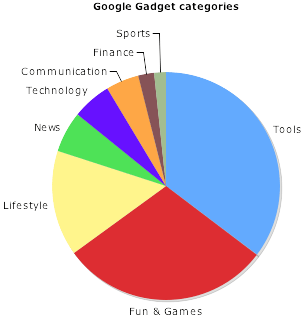 Most Google Gadgets (80%) fall into the tools, fun & games, or lifestyle categories. The tools category is productivity-focused, helping users track their latest shared documents in Google Docs or search the yellow pages. The tools category is also a bit of a catch-all and therefore makes sense as a top category. The fun & games category helps people play Tetris, Pac-Man, or Sudoku from their homepage or blog sidebar. The lifestyle category features content such as recipes, a photo of the day, and popular videos.

Gadget authors may specify up to two categories per gadget, meaning some gadgets are counted twice and others not at all.